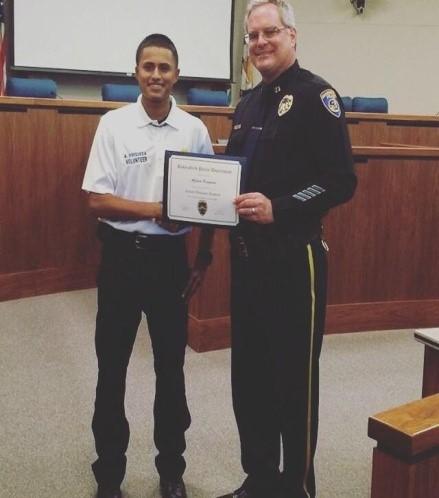 Born and raised in Bakersfield, Ca, 23-year-old Alfonso Osegueda grew up at Adelante Vista, a Housing Authority of the County of Kern low-income housing development in east Bakersfield. The youngest of two and raised by a single parent that worked every day to provide for a better future for her kids. Alfonso lived in Adelante Vista throughout his college years and his main goal was to provide for his mom.

Living in a neighborhood active with crime and law enforcement geared his attention toward becoming a Bakersfield Police Officer. He wanted to work towards a better community and was intrigued by the uniforms police officers wear.

Osegueda was five years old when he started attending our Boy Scouts Program and at the age of 10, he enrolled in the Teen Club Leadership program and continued until he was 18-years-old when he graduated from Bakersfield High School. During his time in teen club, he did community cleanups, helped with office events, attended Leaders in Life while attending High School and helped with food baskets. Osegueda did a lot of mentoring while he was in our programs and maintained a solid kid considering he grew up in a tough environment.

He attended Santa Barbara Business College (SBBC) and during that time, he enjoyed ride-a-longs with the sheriff’s department. He joined the Bakersfield Police Volunteer Unit in 2013 and has continued with the Unit. In 2017, he graduated from SBBC and received an associate’s degree in Criminal Justice. Finally, after hard work and receiving an education, he was able to move his mom out of Adelante and into a house they can call home. He felt great because he was succeeding in his goals, especially moving his mom out of the development he was raised in. That's where Osegueda's goal became a reality.

On October 17, 2017, he took his test to begin the process for Police Training. Now in 2018, Alfonso Osegueda, will be a Cadet For the 2018 Police Academy. He is excited to begin his journey on February 27, 2018 and looks forward to continuing taking care of his mom.

Service Coordinator, Chris Carrera, guided him for over 13 years and continues to assist him throughout his journey. Considering how much he has accomplished at a young age, there is no doubt Alfonso Osegueda will achieve new goals he sets for himself.